Translator: This part seems to have confused some people. I will add names in () for the beginning to show who is talking. You can also scroll to the bottom to see illustrations of some of the characters.

“Not only that, but this time it took six months for one to arrive. These are strange times. Chancellor, had there been any divine revelations?”(King)

“I have heard of no such reports.”(Chancellor)

“Then that means there are two of them. Or double the purification ability. Or maybe each has half of the power. In any case, thanks to the previous Saintess living so modestly, we have plenty of funds to accommodate two. As there are two this time, their responsibilities in each land might also increase. Well, we will send them out within reason. It should not be a problem. That is all.”(King)

“May we not have them start tomorrow?”(Chancellor)

“We will follow the Saintess manual. They will likely consider it for a month, at worst for half a year before accepting. The thing is to allow them to live quietly and peacefully so they do not go mad at first.”(King)

“Then perhaps it was a good thing that there are two of them. They do seem to be acquaintances.”

“She was not afraid of beastfolk.”

Zynis said. Aeris smirked and cupped his chin with his hand.

“Yes, now that I think of it. You may finally have a Saintess willing to visit your kingdom. She even appeared to enjoy some height. I dare say she may be able to ride the airships. Perhaps we can send one to the beast kingdom and one to the elf lands.”

“You are getting ahead of yourself Aeris. Really, three-hundred-years-old and you still have not calmed down…”(King)

“Women of other countries tend to prefer quietness. You must avoid giving them any pressure.”(King)

“Would such a quiet woman drink to the point of vomiting?”

“Had you noticed that, Arthur?”(Grudo)

The king furrowed his brows again. Zynis and Aeris frowned. That had been quite a shocking experience for them.

“Well, they were summoned with the weight of the world on their shoulders. It would make anyone sick.”(King)

“That will be the official story then. In any case, I’ve become tired of this boring palace life. Things are starting to get interesting.”(Grudo)

Said the king and Grudo.

“Tomorrow. We will see how they are doing, and talk if they are able.”(King)

And so it was decided. As everyone left the room, the prince approached Aeris.

“Um, Aeris. What did you think of them?”(Prince)

“That is a difficult question. When I first saw them, they were curled up on the floor. And when I helped one of them who was about to fall, I only saw the back of her head. Just as I thought she had looked towards me, she discharged, you know. I only saw that she was short and had black hair.”(Aeris)

“That seems to be a feature of the other country. I expected that. I want to know what else was different.”(Prince)

“So she must be an adult then. I wonder if we will be able to get along.”(Prince)

“Prince, Saintesses do not bear children. It is out of the question for them to marry into the royal family. And it is still too early for you. You are only eighteen.”(Aeris)

“Well, I am still an adult. And it is not as if there were any divine message about them not being able to bear children. Just because it has been so until now, it does not mean that these Saintesses are the same.”(Prince)

“Well, you can hold whatever dreams you want. Zynis, you look very happy.”(Aeris)

“Aye. I became the first beastman to touch a Saintess in many years.”(Zynis)

“It is almost surprising that the Saintesses of old did not fear beastfolk, now. I am not sure how I feel about them yet. But I doubt I shall be bored at least.”(Aeris)

They left the room, along with the prince who was still annoyed at being treated like a child. They would get a good look at their faces tomorrow. And then Aeris noticed it, the air in the palace had become perfectly clear.

Also, here’s some art in case you are confused. 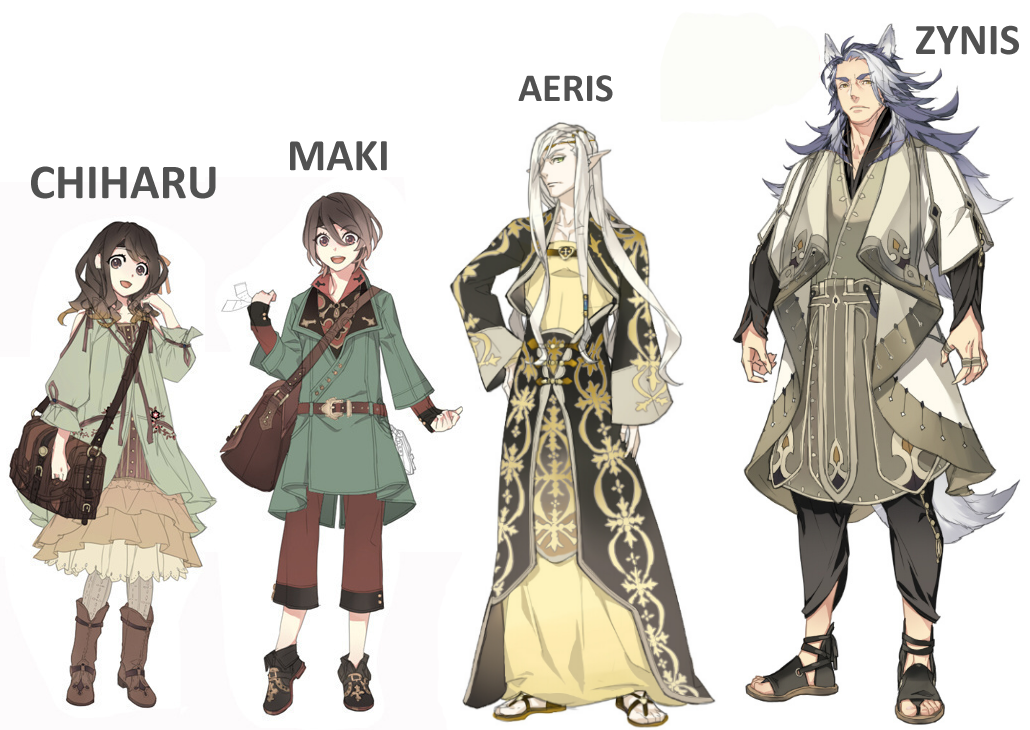